A Course about Jerusalem Unites Students in Amsterdam

Some 20 students from different European study programs and from a wide range of backgrounds, including Muslims, Jews and Christians, are participating in the first summer school on “Jerusalem and the Three Religions” taking place at the Protestant Theological University of the Netherlands (PThU) in Amsterdam, the Netherlands.

This course is part of a unique academic partnership between The Schechter Institute of Jewish Studies and PThU. During the week there are lectures and seminars about the history and archaeology of Jerusalem, holy places in Jerusalem and the relationship between Jews, Christians and Muslims in the city. Prof. Doron Bar and Dr. Tamar Kadari, SIJS president and dean respectively, are both lecturing in Amsterdam. “What unites the students is the fascination for the city. Jerusalem is not an empty theme,” said Dr. Lieve Teugels, Lecturer in Jewish Studies and Semitics (PThU), in her welcome speech. “I know that all the conversations and discussions this week will be conducted with respect for each other and each other’s convictions.”

“In my lectures, I discussed the myths related to the city and the religious myths of sanctification,” says Prof. Bar, a historical geographer who specializes in documenting the development of Jerusalem’s holy sites and is himself a 7th generation Jerusalem resident. “My acquaintance with Jerusalem – both historical and personal – allows me to present the complexity of the city. Since the Israeli reality is very complicated to understand and is often misinterpreted in the international media, it is important to present the Dutch students with a balanced and critical voice about Jerusalem, its history and the present situation on the ground. It also allows me to explain the complexity of the Israeli experience, and highlight the tension between Judaism and Israeliness through the lens of holy places.” Dr. Kadari, an expert in Biblical exegetical literature, lectured on various aspects of Jerusalem in rabbinic literature.

The summer school, supported by an Erasmus+ grant awarded by the European Union to the two institutions in November 2018, explores a city holy to three religions. The course provides students with a unique opportunity to engage in conversation with students and professors from all over the world. The school focuses on biblical history and archaeology; the religious significance of Jerusalem in Judaism, Christianity and Islam; the meanings of pilgrimage; the architecture of holy sites; and the impact of contemporary politics on the city.

“Jerusalem is a place loaded with meaning for Jews, Christians and Muslims. It is often a contested place. Everybody has heard of Jerusalem, but most miss the information to really put Jerusalem’s history, ancient and modern, in perspective. In this summer school we hope to contribute to just that” says Dr. Teugels. “Apart from a rich variety of perspectives and aspects of Jerusalem, the students also enjoy ways of studying that are new for most. The students got a hands-on experience of Jewish learning by studying biblical and rabbinic texts in small chavruta groups.”

“By reading texts from different traditions, I gained a deeper understanding both in these texts themselves as well as the underlying discussions that surface through them,” said Dr. Wout Koelewijn, a senior relation manager for Medical Specialist Care and a PThU premaster student.

“As an activist in the political humanitarian point of view of the Israeli-Palestine conflict, I felt that I’m missing some background about where it all started. I find it very interesting,” added Geke van Vliet.

“I think that in order to have a good dialogue you need to understand where the other person is coming from, so participating in this summer school helps me see points of view of people who are so different from me, and I hope that the result in having meaningful conversations that will eventually lead to peace. In the future I will want to be involved in connecting people who have different views and become a dialogue coordinator,” concludes Marije van der Poel.

The Erasmus+ grant is intended to enhance cooperation between the two institutions and encourage exchange of students, staff and administrators. “Both institutions see great importance in making Judaism and Christianity a source of inspiration. In light of the hostility that has existed between these two religions for thousands of years, there is an important emphasis on the connection between the two religions,” says Prof. Bar. 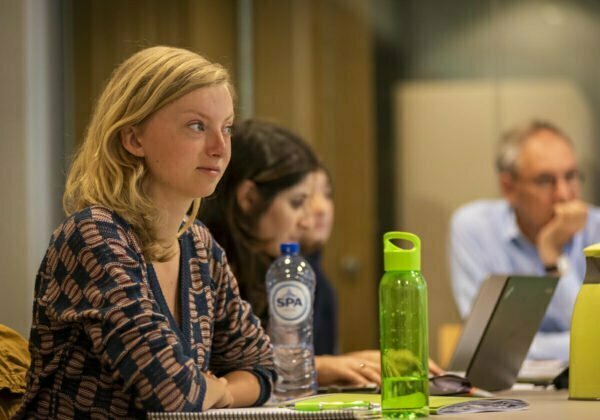 For further information, interview opportunities or more personal stories from the participants, please contact Moriah Aharon, Director of Public relations who is currently in Amsterdam at +972508670051 moriah@schechter.ac.il

Today, Schechter is an independent and fully accredited Israeli academic institution offering an M.A. degree in Jewish Studies, rabbinical ordination and a myriad of programs that provide Jewish education, resources and experiences to over 85,000 children and adults throughout Israel, in the Ukraine, and in North and South America.

The Schechter Institutes receives support from numerous individuals and foundations, including from the Netherlands-based The Dutch Jewish Humanitarian Fund and CIS – Centrum voor Israel Studies.

Schechter Leaders and Students Hosted by the Latin Patriarch in Jerusalem

Leaders of the Schechter Institutes and members of an interreligious dialogue course met with the Latin Patriarch His Beatitude Pierbattista...

Rabbi Oded Peles is ordained in a special ceremony in Jerusalem on Feb. 23.

The Schechter Institute of Jewish Studies and The Schechter Rabbinical Seminary are experiencing significant increases in new student registration.

Update on the Schechter Non-Profits from Rabbi Prof. David Golinkin

Dear Friends, I hope that you and your families are safe and well at this difficult time. If you or any...

Help us make Schechter's Judaism of Color a reality for thousands of people.

Sign up to our newsletter for the newest articles, events and updates.

* We hate spam too! And will never share or sell your email or contact information with anyone